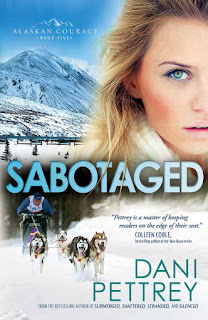 
Kirra Jacobs has known Reef McKenna practically her whole life, so you can imagine her surprise when the carefree, no-commitment, flighty boy from her childhood volunteers to help her track down her missing uncle and sticks by her side as the mystery involving his disappearance takes a turn for the worst. Could she really be that wrong about the boy who she swore would never grow up?

Kirra had always had the power to get under Reef's skin. Ever since she ratted him out for bad behavior for the first time in Kindergarten, she'd retained her top-billing as his primary nemesis. When he tries to step up and do the right thing for the girl who drives him absolutely crazy, he get's pulled into a disaster he'd never imagined, falling for the girl he'd thought had it all together.

Good vacation read, also would be great in early March during the Iditarod race in Alaska.

The instant chemistry between Reef and Kirra is excellent. I hate what Kirra went through, but her journey to healing is really encouraging and makes her relationship with Reef that much better. Love the dynamic to what both of them bring to the relationship and how they both have to reassess their perceptions of one another. The characters really do a great job of growing through their experiences. Having read the earlier books in the series, I loved the insight into Jake, Gage, Darcy, and Kayden through their narration. The point of view switches could leave readers who don't have a history of the previous books wondering about the characters that aren't quite as well developed but share in presenting their point of view.The guys say and feel and think the right things, but there's always something a just a little too fluffy about them (the way they go about it). They're genuinely masculine in most areas, but some of their speeches seem off.

So, I know that these aren't EXACTLY true to character descriptions (Kirra's eyes are supposed to be blue) but I feel like these two so perfectly embody them that I had to look past eye color

So many different trails to chase. I like that there are two great motives behind the villain's plans, but you don't know for sure exactly why everything is happening until the story is ready to reveal it. The suspense is well done, and while it's a crazy ride, it's very well grounded in reality - not seeming at all far-fetched.I got a kick out of the story from Jake's point of view. Poor guy can't catch a break for a while there.
Seems to drag a little bit at the end when they're in search of the villains. I was having a hard time keeping my mind on the story, but that may be a personal problem - oh the woes of the bibliophile mother.

Loved that this takes place during the Iditarod race throughout Alaska! Kodiak, Alaska. University of Alaska, Anchorage. The weather descriptions had me reaching for a blanket, feeling the chill reaching out from the pages.

The writing of this book is captivating, as I've grown accustomed to with Pettrey's books. The easy dialogues between characters, great environment, and plot pacing keeps you intrigued and makes it hard to put the book down.*Switches point of view in Kindle chapter 14 without any break - could be a formatting issue.

The two most prevalent themes seem to be trusting God and accepting the fact that there's more to people than we may initially perceive, or recognizing that God can change people. Both were so well based with great resolutions. Great scripture reference to John 16.

"Why wasn't she ready to fully release all the pent-up sorrow and pain? Because she feared if she fully acknowledged what she'd been holding inside for so long, it would overwhelm her, flood her, and she'd break. She wasn't strong enough. She was getting by, but healing took work, courage, strength she didn't have."

Not gonna lie, you guys. It's been a crazy couple days. While I'm recuperating from my kiddo's track and field day at school and thanking God for the perfect day to be outside, my thoughts are pretty much *wind tunnel* *blank space* *complete vacuum* Hope you're super blessed today and get to enjoy some beautiful weather wherever you are!


"The heavens declare the glory of God; the skies proclaim the work of His hands."