The Contest by K.E. Ganshert 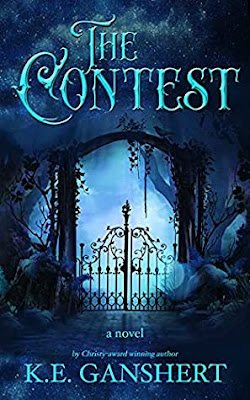 The Contest by K.E. Ganshert

This great new YA fantasy novel will send you on a magical ride and leave you begging for a sequel.

While I had to drop a star in my rating because of a somewhat clunky and stilted feel within the first couple chapters, when K.E. Ganshert hit her stride I did not want to put the book down. Even though I'm getting up there in my years (hello 32!), I still enjoy the occasional foray into literature aimed at my younger self. The Hunger Games was a series that particularly grabbed my attention, and I believe this new venture by Ganshert may attain that distinction as well (although it will be a challenge for this to surpass her Gifting trilogy which currently holds my highest YA accolades).

Briar Bishop is fighting for survival in a world where the rich get richer and the poor battle population control due to a sweeping sickness in the slums they will never be able to escape. After the tragic loss of her mother, father, and a brother, she is determined to give her last remaining relative (her little brother Lyric) the best possible life she can scrounge up. When their circumstances change for the worst, Briar is forced to accept a mysterious invitation as a last ditch effort to save the only person she has left in the world.

As the High Prince of Korah, Leo Davenbrook seems to have the world at his feet. Unfortunately, he is bound to walk the tightrope of the monarchy with no chance of escaping the throne or the pervasive evil that seems to overtake those obliged to lead. Upon receiving a missive that could just be his last hope, Leo decides to accept a challenge that will lead him to unearth secrets of his past and may just destroy everything he knows to be true.

There is something you want.
A wish you would die for.
Come and see how it might be granted.

Briar hates just about everything. She is the typical sullen teenager except that she seems to have a good reason for her animosity. Having watched the death of her parents at a young age and left to survive with her siblings at the age of 7, Briar's outlook on life is founded in the cold, hard reality of the slums. As a cipher, her low class status has defined every aspect of her life. Her brooding personality is apt and her tendency for distrust built on life experience sometimes serves her well, sometimes makes her seem fickle. Nevertheless, she has to overcome and revise some basic tenants she has always believed to be true in order to complete the Contest.
Leo does a lot of growing up in this book. He starts out as a young man with no hope, trying to lose himself in whatever he can - drinking, women, etc. - to avoid the reality of his destiny. Knowing that he cannot escape the grip of the throne and the evils that accompany it, he seems to be searching for a distraction. When he finds hope in the Contest, even though it may cost him his life, he finally begins his journey to becoming the man that could overcome the challenges of ruling and even conquer the demons that seem to consume every leader.
The Wishkeeper is probably my favorite character in the book because of the magnitude of his impact on each individual. The allegory is fairly obvious, but no less poignant because of it.

After the Purge, all magic has been forbidden, made illegal by order of the High King of Korah. A deadly disease known as Parox is sweeping through the impoverished areas full of the lowest class of citizens: the ciphers. A cipher by the name of Briar is struggling to make ends meet along with her little brother, Lyric, when their kind neighbor contracts the disease. In an attempt to acquire medication they cannot afford, Lyric commits a petty crime and is sentenced to death. The drastic measure is not uncommon in the slums, but Briar is left to her own devices to save her last remaining family member. She must enter a deadly contest in hopes that the Wishkeeper will grant her greatest wish - her brother's freedom.
Prince Leo has a wish of his own. Bound irrevocably to the throne, he knows that with the title comes corruption and a pernicious poison that turns good men into tyrants. Tied by magic to his position, abdication would stop his heart and so it seems a wish may be his only hope to escape his fate alive.
As twelve individuals compete to attain their heart's desire, they begin to discover commonalities that are too far-fetched to possibly be true. The Contest was created to unearth attributes worthy of the wish: bravery, discernment, and intuition through a series of trials where one may be eliminated by way of time, death, or loss of a special token. The competitors face decisions of who to trust and are challenged to go beyond what they think they are capable of. Through the contest, they begin to discover that much more is at stake than their wish.

Flashbacks occur to the year of Korah, 483. Contemporary time is approximately 518, year of Korah.
Fantasy land of Korah, mostly in the capital city of Antis and Cambria (aka the Forbidden Island)
Scene descriptions are wonderful, allowing you to immerse yourself in a vivid mental picture of this fantasy world.

Third person omniscient. Narrative. Multiple points of view.
Clunky at the beginning, but the flow of writing smooths out a few chapters in. The writing feels a little like juvenile fiction, but the content is definitely young adult. There are some literary faux pas such as the overuse of the word mysterious and too many ", for" clauses, warranting less than a 5-star rating, but the overall flow and pacing of the book is wonderful.
One of my favorite character style elements is Leo's alliterative adjective nicknaming. At first I thought it was just a quirky thing he did when inebriated (yeah, that's how we get to know him), but the background of the "game" is wonderful, and I picked up a new vocabulary word through one of his musings (look up mendacious, it's absolutely wonderful).

Where is the Wishkeeper in the midst of pain and suffering?
Why do some wishes get answered and others seem forgotten?
Self-sacrifice.
"According to Papa, the good guys always won. Against all odds and logic, Papa believed this was the way of the world. Good would win. Good had to win. And if good wasn't winning, then it wasn't the end. Papa's belief had been so strong - so ingrained - that those had been Echo's final words. I saw it happen, Briar. You're going to be the hero. You're going to save us all."
"Lies and deceit. Fear and cowardice. All of it was poison in the walls. Poison that needed to be eradicated." - The overcoming of evil with truth and goodness.

"People are afraid of what they don't understand," Phoebe liked to say. "According to my papa, that's the danger. Not Magic. But the fear of it."
"This contest will be a reflection of life. There will be times of great peril. Moments of tremendous uncertainty. When you find yourself in such an occasion, when you are unsure which way to turn, remember to look to the light. Not the night."
"It was easier to believe her wishes had fallen on imaginary ears than indifferent ones."
"Her actions don't excuse you from doing what's right."
"Right according to whom?"
"Right according to right."
"The world didn't care about good. But maybe that was only true so long as people kept making the easy choice, the short-sighted choice, the personally advantageous choice. maybe that was only true so long as people kept feeding the corrupt cycle. Maybe it took one person - just one person - to step up and do what was right. Do what was best.. Here was the chance to break that cycle. Here is the chance to make the right choice."
"And when it didn't feel like it - even in the darkest, most hopeless of nights - she had never, not once, been alone."

I absolutely loved this book. While we got off to a rough start with the introduction feeling a little off... awkward, maybe? Ganshert hit her stride a couple chapters in, and I fell in love with the characters and the story. Not sure if I'm just reading a bit more into things, but it seems like there are some subtle motifs, naming conventions, and symbols that bring a whole other layer to the book and leave me really curious about the next books in the series. Looking forward to the next installment!
Get your copy on Amazon by clicking here!
Quick note on more mature content: For those more conservative parents who are looking for an older Juvenile/YA fiction, be warned that there is some teen drinking (although they are of legal age in this fantasy world) and Leo actually is drunk when you first encounter him. Prostitution is a reality in the slums and one of the sub characters Briar encounters is professed to be such a lady. The romance gets a little steamy for any younger teens, but does not evolve into anything too sordid. I won't be letting my 12 year old read it for a few years as the content is a little too mature, but that comes from knowing my kid's current level of exposure and what she can handle. I know some kids are already more familiar with some of these concepts.
With Love,

**Disclaimer** I received a free copy of the book from the author in exchange for an honest review. All comments and opinions are solely my own.
Posted by TheModestMillennial at 11:39 PM